The Audio Mental Training programs use sound to directly affect the brain through a complex neural process called Brainwave Entrainment. Brainwave Entrainment (pronounced: “ehn – TRAIN – mint”) refers to the brain’s electrical response to rhythmic sensory stimulation, such as pulses of sound or light. 1 2 3 4 5 Entrainment is a principle of physics and it is defined as the synchronization of two or more rhythmic cycles. The principles of entrainment also appear in chemistry, neurology, biology, pharmacology, medicine, astronomy and more.

When the brain is given a stimulus, through the ears, eyes or other senses, it emits an electrical charge in response, called a Cortical Evoked Response (shown below). These electrical responses travel throughout the brain to become what you “see and hear.” This activity can be measured using sensitive electrodes attached to the scalp. 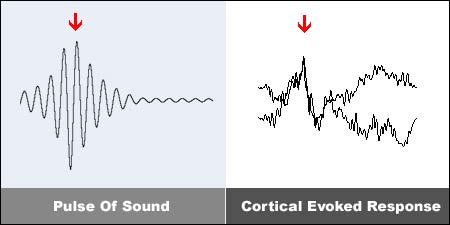 When the brain is presented with a rhythmic stimulus, such as a drum beat for example, the rhythm is reproduced in the brain in the form of these electrical impulses. If the rhythm becomes fast and consistent enough, it can start to resemble the natural internal rhythms of the brain, called brainwaves. When this happens, the brain responds by synchronizing its own electric cycles to the same rhythm. This is commonly called the Frequency Following Response (FFR).

Frequency Following Response can be useful because brainwaves are very much related to mental state. For example, a 5 Hz brainwave is associated with sleep, so a 5 Hz sound pattern would help reproduce the sleep state in your brain. The same concept can be applied to many other mental states, including meditation, concentration and relaxation. 6 7 8

If you listen closely during an Audio Mental Training program, you will hear small, rapid pulses of sound. As the program progresses, the frequency rate of these pulses is changed slowly, thereby changing your brainwave patterns and guiding your mind to various useful mental states. Audio Mental Training brainwave entrainment programs are using binaural beats, isochronic tones and monaural beats.

When two tones of slightly different frequency are heard separately in the left and right ears, the listener perceives a single tone that varies at a frequency equal to the difference between the two tones- a perceptual phenomenon known as a binaural beat. Although this effect was discovered in 1839, binaural beats have been the subject of greater public interest in recent years. This is largely due to a number of misconceptions about what they are capable of, but in part it is because they are one of multiple forms of stimulation that can be used in brainwave entrainment.

Isochronic tones are regular beats of a single tone that are used alongside monaural beats and binaural beats in the process of brainwave entrainment. At its simplest level, an isochronic tone is a tone that is being turned on and off rapidly. They create sharp, distinctive pulses of sound. 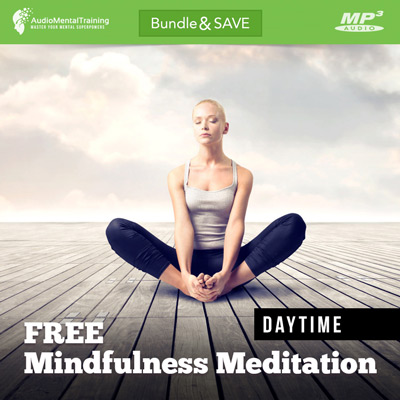